Words and photos by Jenni Mazaraki

A cup of tea tastes better in a handmade mug. Especially if it’s one of Mary-lou Pittard’s mugs and you’re sitting at one of her decorative tables at the end of a warm and balmy day.

I had the loveliest afternoon visiting the Pittard’s ceramic art studios. Mary-lou and Jessie Pittard showed me around their studios, explaining their process and treated me to a cup of tea and the sweetest looking little éclair I’d ever seen.

The Pittard family Mary-lou, Chris and their daughter Jessie are artists working from their studios in Eltham North. As part of the Nillumbik Artists Open Studios program, they invite people to visit them and have a tour of their studios on two weekends during November 2016.

The Pittard’s studios are creative spaces, each with its own purpose and use. In the front of the property, Mary-lou has her work set up on display in a gallery/shop set up. The shop is in the mud brick building which the Pittards have called home for 26 years.

A cheerful bike rider made by Mary-lou on the wrought iron gate.

Mary-lou has been working as a ceramic artist for over 30 years after completing a Fine Arts degree at Phillip Institute. Her work is a glorious display of colour, with hand painted designs adorning her work. Motifs of fruits, leaves, birds and animals show in different forms in her work. Useful objects such as large serving bowls, jugs and mugs sit beside some more sculptural pieces which were exhibited in Paris.

Mary-lou at the entrance to her gallery.

When I arrive, Mary-lou is describing her Paris exhibition to a visitor, and it is clear that whilst she is proud of her work, she is unfalteringly modest. “Look at me talking about exhibiting in Paris!” she said, self depreciatingly, but her work speaks for itself. It is at once beautiful, decorative and practical, with an exuberant charm. Mary-lou said that customers often give her ideas for new pieces and she can custom make designs to order. 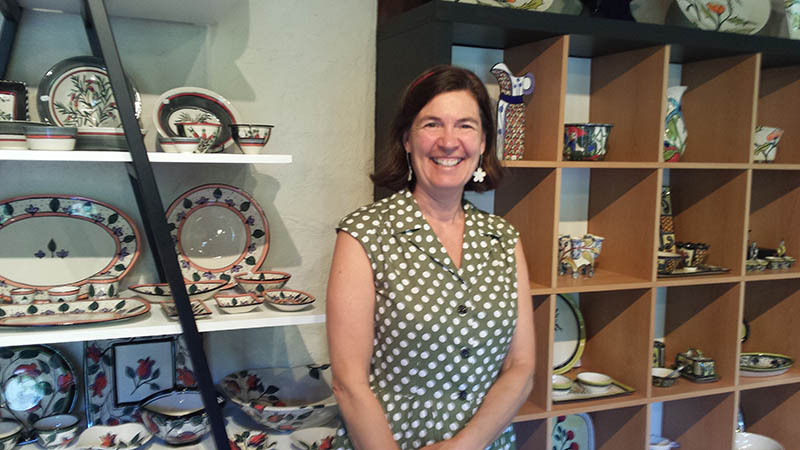 Mary-lou with her decorative table ware.

In addition to Mary-lou’s gallery, the Pittards have three studios on their property. Jessie meets me and takes me on a tour, walking down the gravel path to the first studio space where Mary-lou, Jessie and Chris create work from raw clay and fire it in the kiln.

It is a large metal shed and is organised neatly. Shelves are filled with pieces in various stages of completion. At the entrance sits a machine which I hadn’t seen before and Jessie described how it is used to create handmade pieces with a regular shape for large orders. In this way, customers can be guaranteed the same proportions in a plate or bowl but with a handmade quality.

Jessie in the studio where ceramic artworks are fired in the kiln. 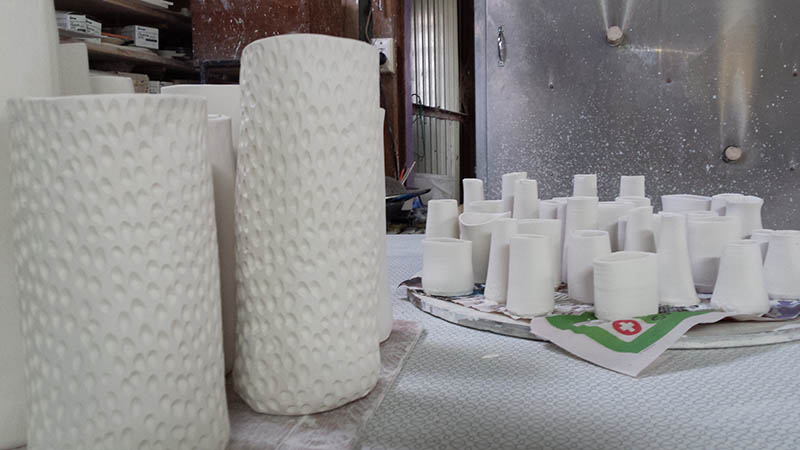 The machine used for large orders.

The second studio Jessie shows me is a new building constructed two and a half years ago. A rustic construction with large wooden barn doors and high whitewashed wooden ceiling, it is an area where Chris can paint his landscapes and Mary-lou can work on decorating her ceramic pieces. It is a space intended for cleaner artistic processes free from the clay dust of the shed. 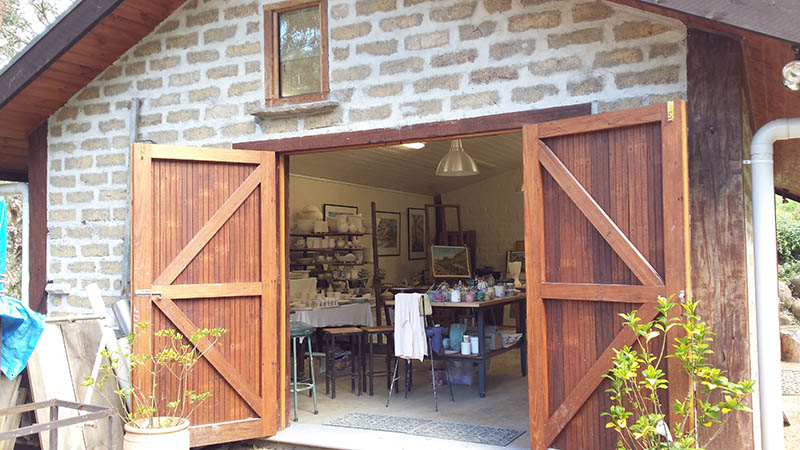 Chris Pittard’s landscape paintings, created at the landscape site and finished in the studio.

The third studio is where Jessie works. With a background in printmaking, the self-taught ceramic artist has a combination of styles. The constant theme is an illustrative, graphic quality which can be seen in her fine art pieces, functional table ware and jewellery. She creates functional stoneware pieces with hand painted designs in muted browns and blacks as well as pieces with colourful decals inspired by 17th century French illustrations.

Jessie’s work features clean lines utilising a combination of techniques to create her work, including wheel throwing, hand building, and utilising handmade moulds. On the wall hang a selection of her prints, showing her expertise with line work and print production. 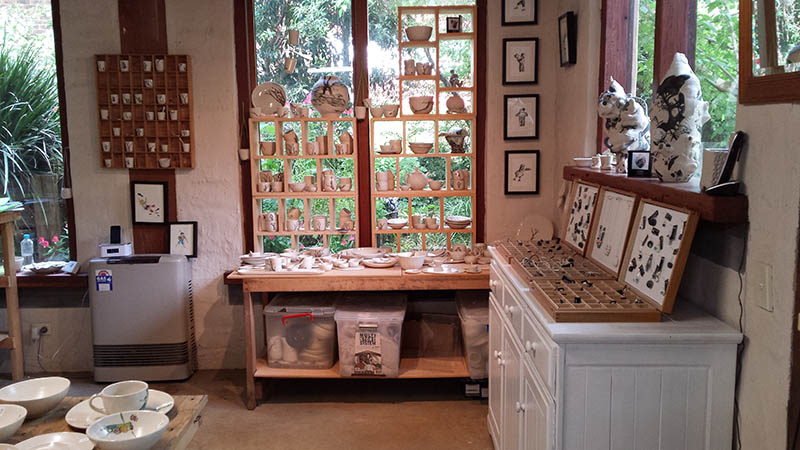 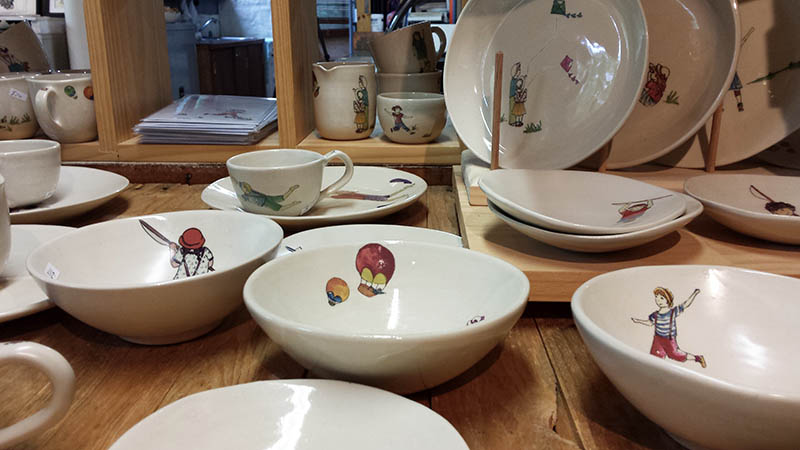 Jessie has been working as a ceramic artist for the last 6 years, knowing that it’s what she wanted to do even before she graduated from her Fine Arts degree in printmaking. Experimenting with ceramics whilst studying printmaking, her pieces were selling well during her final year of study. Moving into ceramics meant that she had another surface to adorn with her illustrative line work. 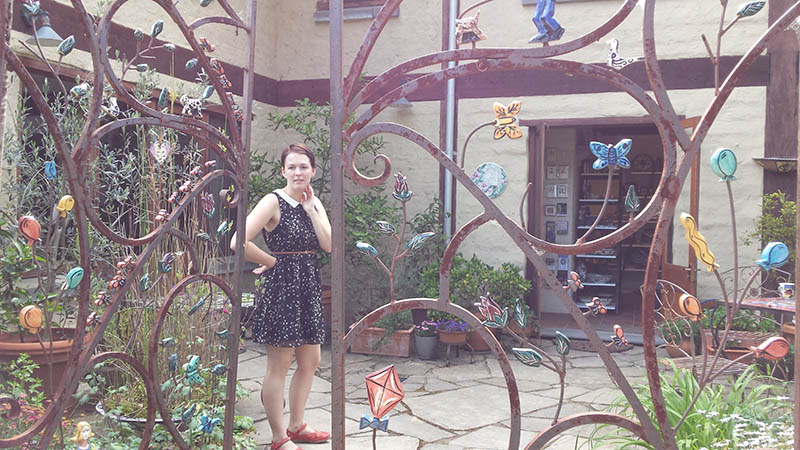 Jessie at the entrance gate to Mary-lou’s gallery. 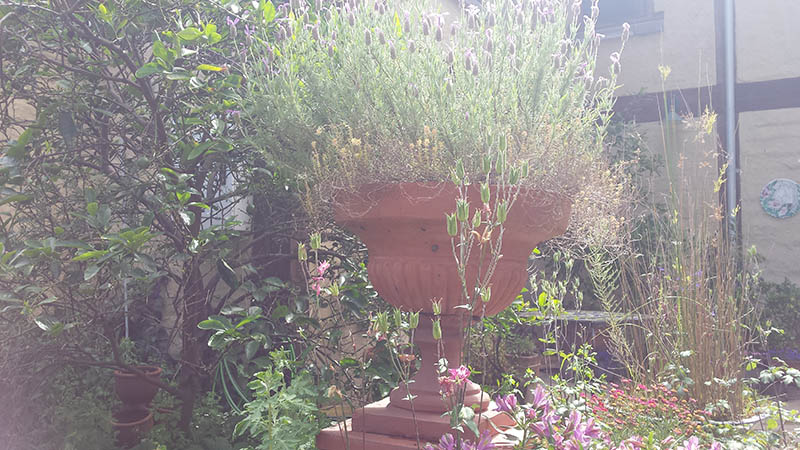 Afternoon tea served on one of Mary-lou’s platters at one of her decorative tables.

Whilst Jessie and Mary-lou work on the same property, they work independently, meeting for lunch or to occasionally assist each other when an extra hand is needed. Whilst their work is distinctly different, they have encouraged each other to try new things along the way.

The next open weekend is on Saturday 26 and Sunday 27 November 11am to 5pm. The Pittard’s work is available for purchase all year, not just at Nillumbik Artists Open Studio time. Just give them a call before you pop around.

For more information see the websites for Mary-lou and Chris Pittard and Jessie Pittard or call 9431 0401.