There’s no poetry without punctuality. That’s what the small embroidery tells us as it sits quietly amongst precious objects collected by Steph Kehoe and her family.

Stitched elegantly and neatly by hand, it was given as a gift to Steph from a Women’s Circus participant after a discussion about arriving on time for training. It’s a reminder that the creative work of the Women’s Circus is important work.

As the artistic director of the Women’s Circus, a community arts organisation based in West Footscray, Steph designs and delivers creative projects for the circus and the community. She works with circus members in the training program as well as working with schools, collaborating with professional performers and working with other community organisations.

Steph trained at the Ecole Jacques Lecoq school of drama. It is a physical based training for actor creators who wanted to create their own work. Masks are used during training to develop physical mime abilities and to develop voice techniques through improvising and devising. 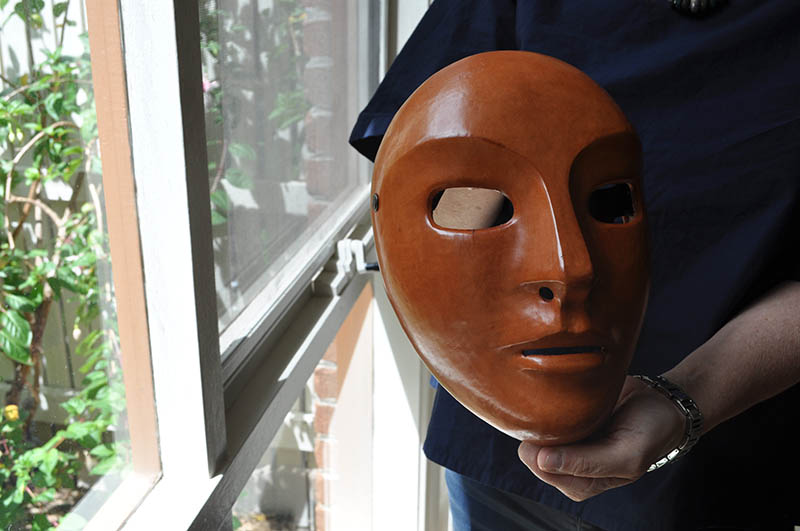 A ‘neutral mask’ made by Steph’s cousin, artist Matt Cheyne.

Steph’s home in Melbourne’s north east is filled with light and colour. Small objects sit like treasures on shelves, tables and window ledges. A candle is lit on the dining table, and homemade blueberry muffins are offered as our morning tea. Our children play as we talk, happily chattering away in the background, occasionally requiring our attention for a cuddle or to answer questions.

A treasured photo of Steph’s Grandmother, Cassie sits on the shelf.

A friend from the UK, Luke, a theatre director is staying with Steph for the week and we briefly chat about the importance of finding something that is important to you and pursuing it, before he cheerfully sits with the kids and they all make a jigsaw puzzle together.

It is a welcoming home with LP’s and books lining the living room walls. Steph’s partner is a radio producer for Triple R and their home reflects their mutual love of creativity. When I ask Steph about how she nurtures her creativity, she pauses to think and explains that she just lives it. Because her job is in a creative field, work and creativity are intertwined. Creativity becomes part of her daily experience.

Steph’s entrance area with a print by artist Matt Cheyne.

Her garden is home to climbing roses which local possums have enjoyed destroying much to Steph’s annoyance. There is an arbour where her daughter Thalia stages weddings with her friends and a cubby house, made by Steph’s partner, Alex, adorned with colourful wool god’s eyes and a paper clock.

A creative space for women

The Women’s Circus was originally created in 1991 by theatre director, Donna Jackson as a response to her observations of women’s disconnection to their bodies who had survived violence and abuse.

“She thought that circus would be a great vehicle for them to get in touch with their body in a playful way,” said Steph.

The circus training provides an opportunity for women to connect with themselves and with their community. Today, as a feminist organisation, the aim of the Women’s Circus is to provide opportunities for women and children to train in circus to learn skills, connect with others and nurture well-being. 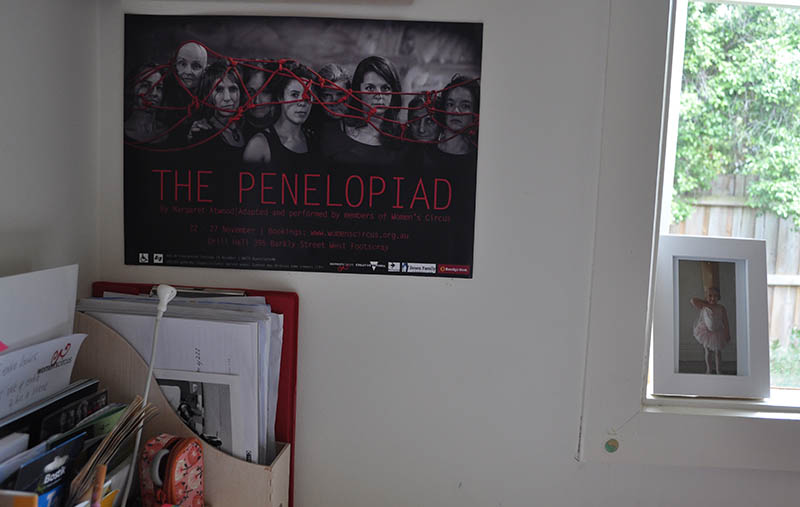 Steph’s home study with the Women’s Circus poster for Penelopiad.

In the year of its 25th anniversary, the Women’s Circus will present their next show, Penelopiad in November. Based on Margaret Atwood’s novel, which adapted the Greek myth of Penelope and her maids, the performance examines violence against women and gives voice to women’s stories.

This voice is explored through circus performance such as acrobatics and aerialist work as well as through theatrical performance such as acting, singing and musical performance. 30 members of the Women’s Circus will come together to perform the show. As a key motif in Penelopiad is around threads and stitching, it seems appropriate that the little embroidery piece on Steph’s shelf gives voice to the Women’s Circus process. 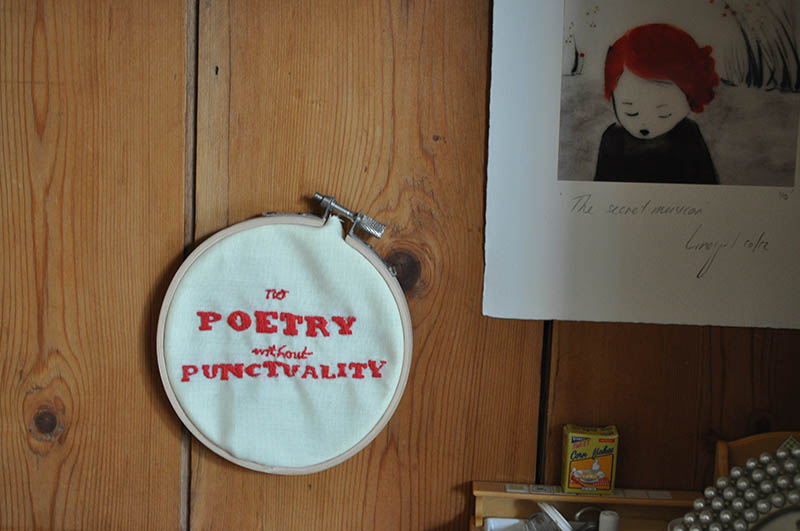 A not for profit organisation, the Women’s Circus is funded by Creative Victoria and Maribyrnong City Council. The community organisation is unique in that it is able to raise revenue through its circus training courses. Recent operational funding has been approved, securing the organisation’s stability to 2019.

Whilst Steph described the Women’s Circus being in a stable position at the moment, she acknowledged the financial challenges which arts organisations can face.

“It’s definitely had its moments where it was held up by sticky tape and love,” said Steph.

For the staff, participants and community members, the Women’s Circus provides a space for women to come together to train and perform in a social circus. Social circus is a unique model which is inclusive of women from all backgrounds and abilities.

As an adaptive organisation, responsive to the community’s needs, the Women’s Circus has recently updated its policies to be inclusive of the transgender community, specifically individuals who identify as women. As a feminist organisation, its aim is to be intersectional in its feminist approach, which means that all types of feminist perspectives are acknowledged and valued.

Steph described this anniversary year for the Women’s Circus as being particularly moving and poignant as the organisation is in touch with many ex-members, including two women who were part of the original ensemble in 1991.

“I feel very proud just to be with the organisation.”

Steph said that the aim of the Women’s Circus is to nurture the artist in all women. “You really feel this very strong legacy that the organisation has,” she said. She admires the contribution of, “the thousands of women who’ve given so much to this place to keep it going through thick and thin.”

Circus training and performance, allows women to give themselves,

“Permission and time to prioritise their creativity by coming to these rehearsals,” Steph said, “these are women who have families and jobs and on a Sunday morning…we start a big day’s work together to make the show, so they’re quite amazing.”

Women attend the circus training for many different reasons. Some may want to improve their circus skills, connect with their community and other women and to build confidence. 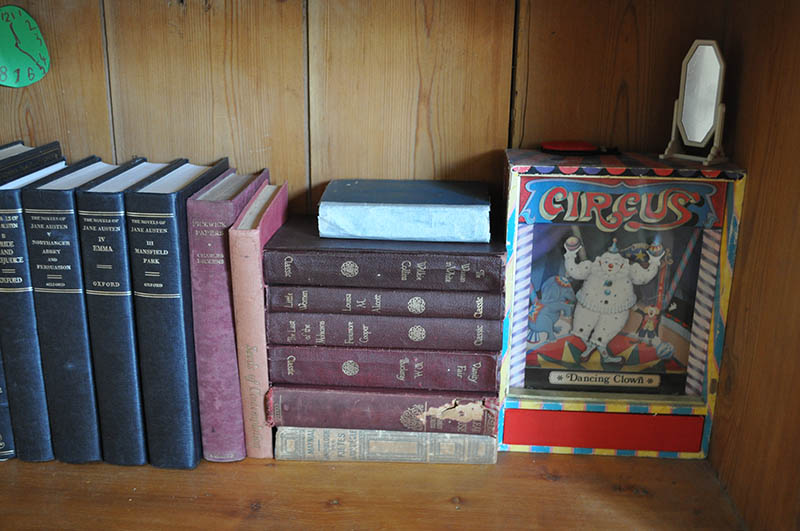 A circus jewellery box in which Steph kept her treasures as a child.

Steph takes a respectful position in her role as artistic director, working collaboratively with ensemble members to bring the show together. Aware that it is the women who will be performing, she is careful to consult with participants to create a production that they are comfortable performing in, to ensure an authentic voice.

The ethos of a participant led organisation is evident in the way the current show, Penelopiad is coming together. Describing a current member’s creative contribution, Steph said,

“I feel really happy when I look over and she’s sitting in a corner and she’s made these crazy lifesaver hats with ducks on them for reasons that you’ll know if you come to our show! It was completely her idea and something that she’s made happen, so that’s great. That’s what the projects are for, to really let people find their thing and give them the space to do it”

Thalia’s fairies gather underneath the bookshelf.

For Steph’s nurturing of her own creativity, she described her work as feeding her creativity. She works on taking time for herself by spending time with her daughter, gardening and pottering around the house, valuing moments to relax. She described the importance of yoga, to encourage her to switch off and be calm.

“I’m sort of, always trying to learn how to do that a bit better I think.”

This will be Steph’s last show with the Women’s circus as she has recently accepted a university teaching position. Her respect and admiration for the members she has worked with is obvious as she speaks about their achievements as they work towards their performance.