There’s a pop-up art gallery in a shipping container in the Diamond Creek Plaza car park. Cube Z may be an art gallery, but there’s a bigger concept at work here.

Diamond Creek hasn’t been looking as shiny as its name would suggest for some time, but a dedicated group of local creative thinkers can still see its spark. They want to showcase Diamond Creek’s hidden gems to cement its identity as a vibrant and creative destination.

A 40-foot shipping container has been converted into a gallery space, complete with track lighting, wooden flooring, windows and ventilation. A brightly painted exterior completes the transformation from utilitarian object to a cultural meeting place in the middle of a suburban carpark.

Local artist Ixia Black has initiated the Cube Z project and has worked with local artists, Mirranda Burton, Melissa Haslam and the Marketing Coordinator of the Diamond Creek Traders Association, Heidi Crundwell, to bring this project to fruition.

LISTEN TO IXIA, HEIDI AND PHIL IN THE PODCAST INTERVIEW:

A vision for Diamond Creek

Ixia Black is the sort of person who sees the true hidden value of a community. As a creative strategist and artist, Ixia’s vision for Diamond Creek is the motivating factor behind this project.

“It may look like an art exhibition, but it’s actually a subversive market research project,” said Ixia.

Whilst Ixia suggests an ulterior motive to Cube Z’s presence in the Diamond Creek Plaza car park, the intention is one of illustrating her deep respect for the Diamond Creek community by providing an opportunity for creative dialogue for the people who live and work here. 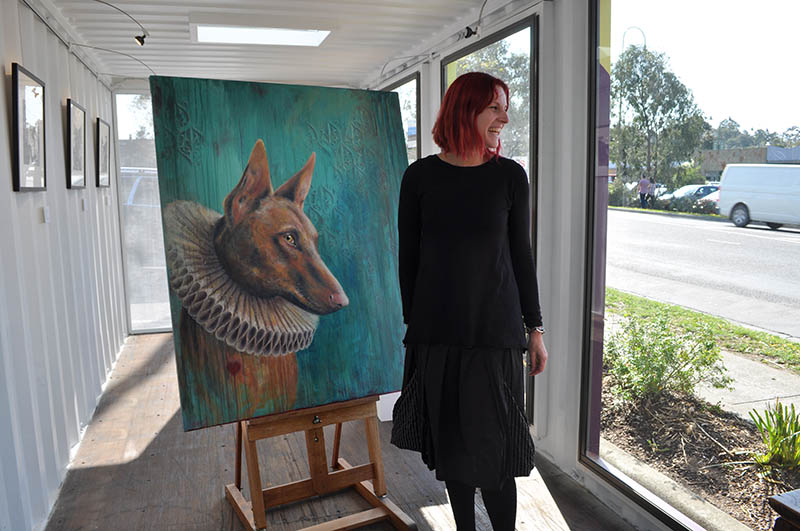 Creative Strategist and Artist, Ixia Black with her painting of her dog, Anubis. 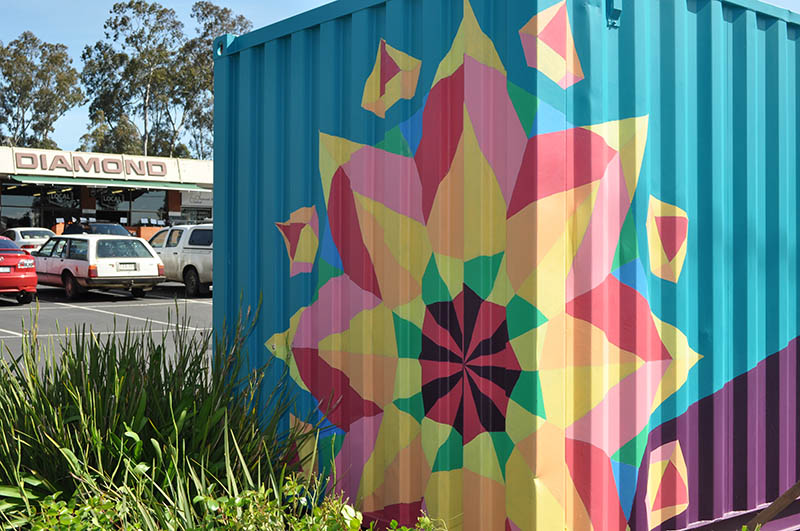 The gallery was launched on Sunday 2 October 2016 after 18 months of planning, preparation and hard work. As part of the initiative, the Urban Legends project invites locals to come into Cube Z to share stories about Diamond Creek to help create an identity for the suburb, “We want to have this as an art gallery but also as a meeting place, a little hub for people to come and share their stories,” said Heidi.

Inside the shipping container, it looks and smells brand new. As a labour of love, hundreds of volunteer hours have been chalked up to bring the space to its current function as a gallery. With the interior painted white, Ixia said Cube Z’s name makes reference to gallery spaces often being referred to as the ‘white cube’. When developing an identity for the project, Ixia also described the name ‘Cube Z’ as being short for a friend’s description of the area as ‘Cubic Zirconia Creek.’

“I want to rebrand Diamond Creek, but not just whack a logo there, I actually want the people of Diamond Creek to tell me what Diamond Creek is and have the artists that I’m working with in Cube Z reflect those stories back in some interesting, quirky way.”

Large glass windows and skylights have been cut into the metal container, flooding the space with light. The large metal doors at the end of the space open with a satisfyingly industrial clank to allow cross ventilation with the doorway entrance. 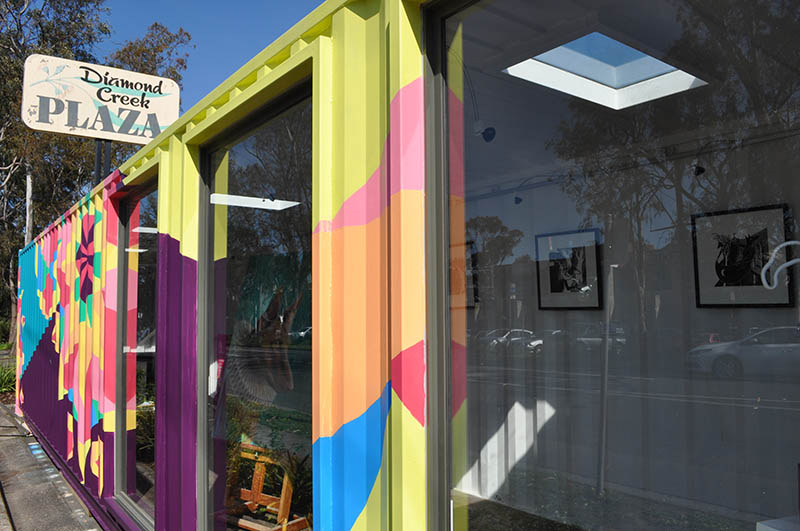 It is a small, but inviting space and it is obvious that the design and construction has been a team effort. Metal worker, Shane Kenny worked some creative magic to set up track lighting, all running off a battery as the space has no access to mains power.

The traffic noise can be heard inside the gallery, creating a hum of energy. This is not a monastic space where art is to be revered with quiet hush. This is a space which invites a conversation from people and the environment.

More than a gallery space

Cube Z has only been opened for a week and already there is a buzz on social media and in the local area. Locals are popping in to see what it’s all about. Ixia said,

“Unlike galleries where artists are bringing their work to the public, what we want is the public to come and talk to us and tell us their stories.”

The gallery space is here to facilitate the Urban Legends project, to gather the stories that people have heard about Diamond Creek. Urban legends are the kind of stories that have a hint of truth mixed in with hyperbole and embellishment.

Ixia described two local urban legends that have already formed part of Diamond Creek’s mythology. One story is of Diamond the cow who was stuck in the muddy creek and refused to get out after a hard day’s work. A reimagined image of Diamond the cow, adorned in diamond necklace and tiara is used on a bright pink billboard, announcing the Cube Z project to passers-by.

The other urban legend of Diamond Creek is about a UFO shaped building that was built in Diamond Creek and disappeared mysteriously in the 1990s, never to be seen again.

The Hello Show is the pop-up gallery’s first exhibition, and showcases the work of Ixia Black, Mirranda Burton and Melissa Haslam who met at Dunmoochin’s Artist in Residency program.

Ixia’s large canvas painting of her much loved dog, Anubis, who has sadly passed away, can be seen from the street through one of the gallery windows. Mirranda’s crisp black and white lino cut prints show scenes of forests and animals in a modern day allegory. Melissa’s highly detailed illustrations show worlds where girls exist halfway between reality and fantasy in scenes of flower grids and costumes.

Ixia Black’s painting of Anubis can be seen through the gallery window.

Sunlight floods in through the open doorway across Mirranda Burton’s lino cut print.

Melissa Haslam’s artwork through the gallery window with a reflection the Diamond Creek Plaza shows the juxtaposition of art and the suburban landscape.

The gallery’s proximity to the everyday happenings of the street means that the art is easily accessible, as people have come to have a look as they do their shopping and pick up their takeaway after work.

Cube Z exists thanks to funds provided by The Shire of Nillumbik’s Community Fund and the Diamond Creek Traders Association.

Phil Marendaz, President of The Diamond Creek Traders Association first heard about pop-up galleries after attending a business meeting in Nillumbik. After discussing the concept with Ixia who has a background in graphic design and advertising, he introduced her to Heidi and the two of them set the project up with Mirranda Burton and Melissa Haslam. 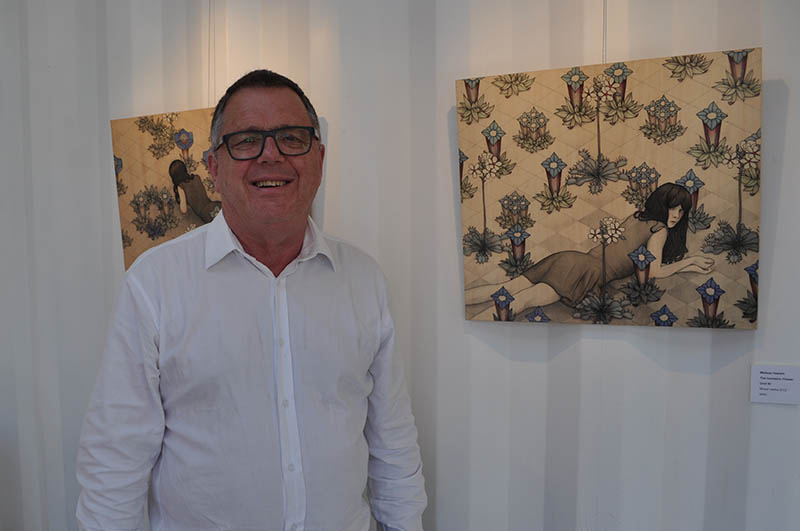 As an enthusiastic supporter of the project, Phil said,

A sense of local pride

Ixia describes the way that social capital stimulates economic development. “Social capital is kind of that bridge between economics and community so it’s kind of been described as the glue that holds communities together,” said Ixia,

“It’s that pride in place.”

The faded facades of the Diamond Creek Plaza serve as a reminder of when this shopping area was built. Brown and beige signage sits quietly within the landscape of gum trees and the bitumen car park stretches out towards the busy main road. 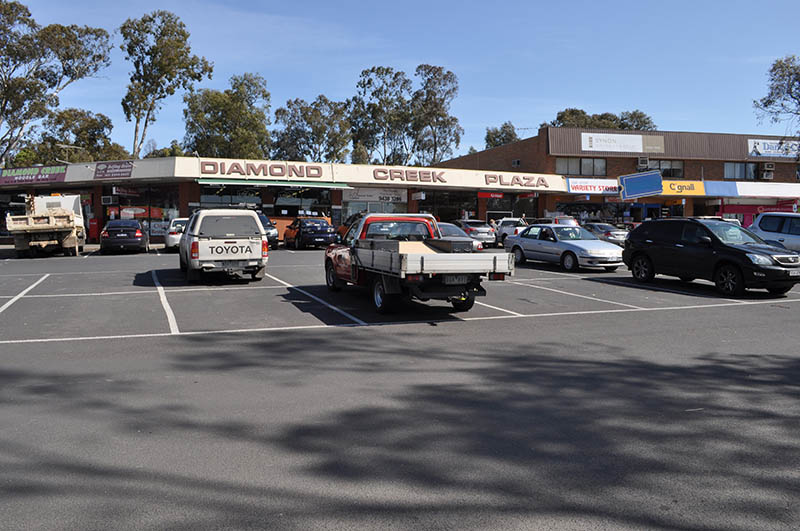 Cube Z’s presence is unmistakable. It cannot be ignored. The shipping container unapologetically demands visibility and heralds a new perspective.

The official mascot image of Diamond the cow on the billboard and the brightly painted geometric designs on the shipping container tells us there is a sense of humour about this project. But there is also an understanding about the local community, a deep respect and a desire to learn more. Cube Z’s role is as a facilitator, to begin those conversations about place.

A suburb in the Shire of Nillumbik in Melbourne’s north east, Diamond Creek sits in The Artisan Hills region where arts and culture flourish.

The area is a vibrant community filled with amazing people, doing interesting things. It’s not just gumtrees and footy ovals. It’s unpretentious and earthy and the incredible people who have worked for over 18 months to bring the vision of Cube Z to this stage are showing that they understand that Diamond Creek is an area with a great sense of pride.

The brightly coloured shipping container sits under the hand painted Diamond Creek Plaza sign, as a juxtaposition, further emphasising the contrast between the old and the new, the past and the present. Cube Z looks to the future with a nod to the past, giving Diamond Creek an opportunity to reaffirm and create its identity as the vibrant, warm, creative place that locals know it to be. 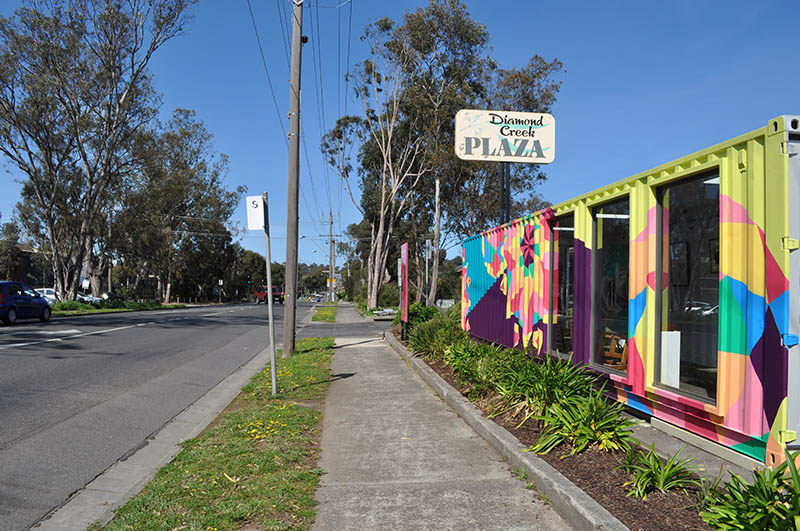 People in the local community are invited to pop in and and say hello. People can visit the pop-up gallery and share their stories about Diamond Creek by writing them down in a book. Visitors will receive a sticker of Diamond the cow as a thank you for sharing their story.

Cube Z will be in Diamond Creek for 6 months, with potential for the project to be ongoing. The pop-up gallery will be relocated during the Christmas period and its location after Christmas is undecided at this stage.*

You can share your urban legend about Diamond Creek on the Cube Z Facebook page or email urbanlegends@diamondcreekshopping.com.au.